Rebel Og Central have confirmed that the draw for the Premier U15 football championship will take place at the Wednesday night board meeting.

Once the draw takes place on Wednesday night, they will be posted on www.rebelog.ie and the opening game in the competition will take place on 14th of October.

The McGrath cup is heading back to Glen Rovers for the fourth time since the Premier Minor County championship was created.

Glen Rovers had five points to spare over Midleton in the decider on Monday night.

In the build up to this game, both teams had great semi-finals wins with Midleton beating Duhallow and Glen getting over city rivals Douglas.

Played in Paric Ui Rinn, Glen got the opening score, and once they took the lead, it was a lead they held for the entire match.

Both teams had their chances in both halts to take their scores but this night belong to the Glen as they ran out winners on a score of Glen Rovers 0-19, Midleton 1-11.

Premier Minor County Hurling Champions
Well done to Our Minors Team on A Superb Victory Over Midleton 0-19 to… https://t.co/KYiI8WOplK

Rebel Og Central are down to the County Semi-Finals stages of the Premier Minor Hurling Championship.

City sides Glen, Douglas, East Cork will be represented by Midleton and Duhallow will take part in Premier 1.

Barrs, Blackrock, Shandrum and Inniscarra are in Premier 2.

The Premier 2a will have Fermoy, Ballinhassig, Fr. O’Neills and Carrigtwohill

12 teams will battle it out for 6 places in their respective finals on Wednesday night.

Below are full details of all the games at Premier 1, Premier 2 and Premier 2a.

Cork Minor Hurling team came so close to winning the All-Ireland title today against Galway, but fell at the final hurdle and lost by just two points.

All involved in Rebel Og would like to thank all involved in the squad and to all the clubs who got behind our minors who made a big impression in the 2017 champipnship.

Winning the Munster Minor title only a few weeks ago was a great achievement for Cork on a day in which we did the double.
Check out @officialgaas Tweet: https://twitter.com/officialgaa/status/904448931689463809?s=09

By John Harrington at Croke Park

The appetiser before the main meal was seriously tasty as Galway edged out Cork in today’s Electric Ireland All-Ireland Minor Hurling Final.

The young Tribesmen came into the game as underdogs but they hurled their hearts out to record a brilliant victory.

Cork had a big billing after an impressive run to the Final and their undoubted class was plain for all to see, but Galway matched them for pure skill.

But in the final reckoning it was pure hard graft that probably won them this match, because the doggedness of their tackling, hooking, and blocking was of the very highest calibre.

They showed impressive mental strength too because they shipped some heavy blows in the first half but their resolve never wavered.

Cork scored their first goal of the match straight from the throw-in as Brian Turnbull hit a ground-stroke to the back of the net after just six seconds.

And when his fellow corner-forward Evan Sheehan cracked home a brilliant second goal from a tight angle to put Cork 2-3 to 0-3 ahead after 13 minutes, it looked like the game would go like most predicted it would.

But Galway hadn’t read that script. They dug in, defended with great tenacity, and began slowing the quantity and quality of ball making its way into Turnbull and Sheehan.

At the other end of the field the strapping Sean Bleahene was starting to make his presence felt and a couple of points from him and some sure free-taking from Conor Molloy had reduced the gap to just three points at the break – 2-7 to 0-10 in Cork’s favour.

Galway’s star man Jack Canning had been well marshalled in the first-half by Cork captain Sean O’Leary Hayes, but he exploded into life in the second-half and provided Galway with the impetus to win the game.

He bore more than a passing resemblance to his uncle Joe when he smashed home two brilliant goals to the roof of the Cork net in the first ten minutes of the second-half to turn the contest on its head.

The confidence seemed to drain from the young Cork hurlers, and they struggled to find an adequate response in the face of some brilliantly aggressive Galway defending.

Canning and Bleahane were now bullying the Cork full-back line and two more points from the deadly duo pushed Galway 2-16 to 2-11 ahead.

Credit to Cork, they came with a late charge that ensured the game went right down to the wire.

Two points from the brilliant Turnbull sandwiched one from Robert Downey to reduce the gap to two points with five minutes to go.

Craig Hanafin had a half-chance to score a goal for Cork after a powerful run and smart pass from classy centre-forward Liam O’Shea, but he couldn’t get his shot off and was then suffocated by the scrambling Galway defence.

Try as they might Cork just couldn’t make any more inroads into Galway’s lead, and that was thanks largely to some truly inspirational blocking and tackling by Jeffrey Lynskey’s young charges.

When the final whistle blew Croke Park erupted as the Galway supporters hailed the perfect start to their afternoon.

It wasn’t Cork’s day, but many of their players clearly have very bright futures despite this result.

Douglas have been crowned Rebel Of Premier 1 County Champions following their win over Midleton by a goal.

Played in Ballinlough, conditions were poor as both teams battled hard.

An old saying is goals win matches and that was certainly the case here as Douglas having raised two green flags had the upper hand over a hard-working Midleton side.

Sarsfield are Premier 1 U16 Hurling Champions following their win over Midleton on Tuesday night.

In a game in which both teams went toe to toe for almost 60 minutes.

Both sides exchanged score after score as they put everything they had on the cards.

At the break Sars led 1-8 to 0-9 as both teams kept exchanging scores.

Sars dug deep to ensure that they would hold back the Midleton challenge in the as the clock ran out.

In what was a tight final both teams were battling hard in the first half and at the break their was just a point between the teams at the break.

Seven points mid-way through the second half is when the he turned on its head and moved Inniscarra’s direction.

All 3 Minor Hurling Finals will take place during the weekend 1st/2nd./3rd. September

All 3 U.14 Hurling S/Finals will take place during the weekend 1st./2nd./3rd. September

Both teams gave it everything. The sides were level at the break and again in the second half both sides brought their ‘A’ game. The lead swapped hands on a number of occassions in the last five mins before Glen scored the winning goal on last puck of the game

Check out the moment that Glen Rovers were crowned U15 County Champions and captains speech after the game.

Click the photo below to view photos from the final 2017 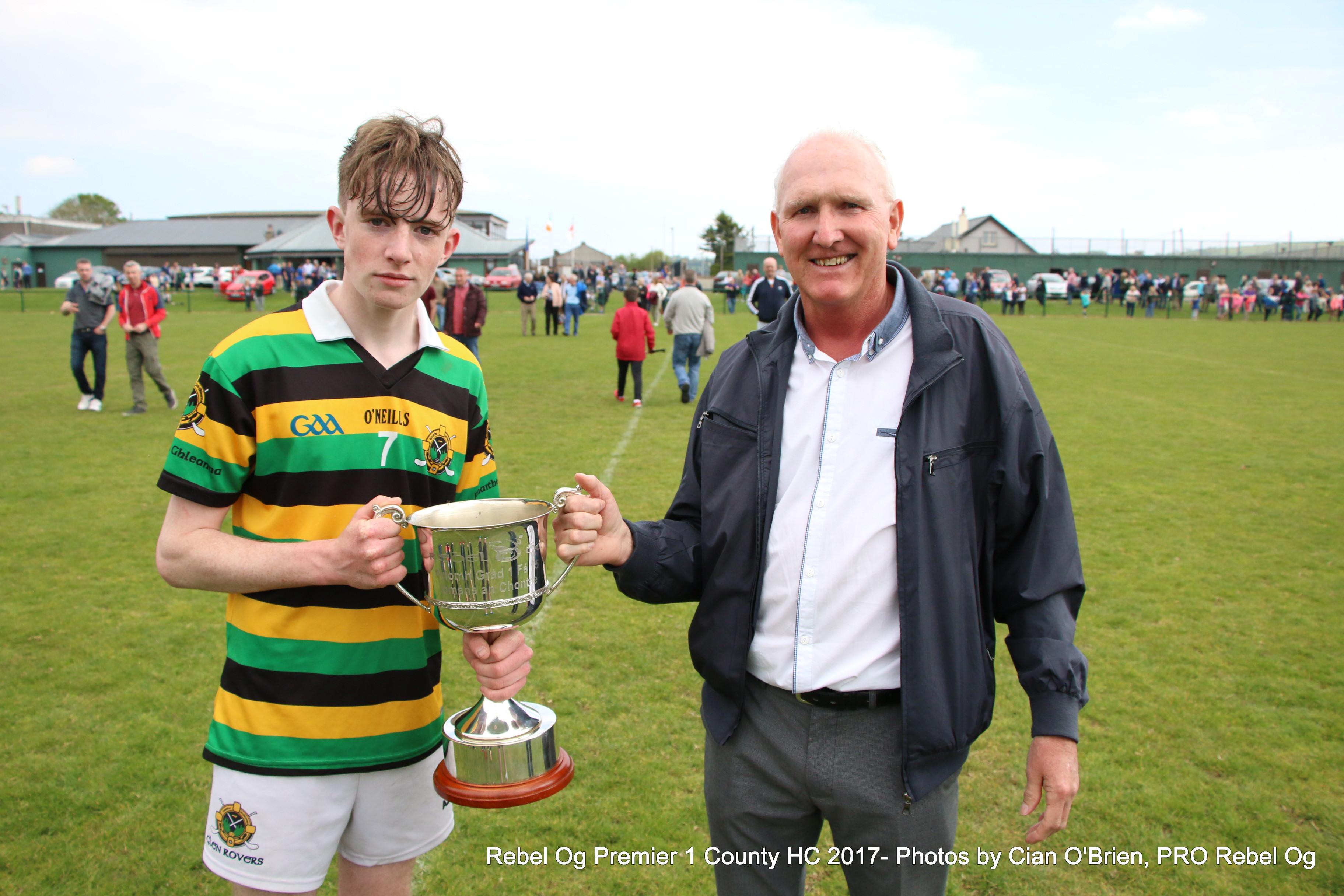 Rebel Og Premier 1 U15 County Final will see Glen Rovers and Sarsfield’s meet in the first top grade County Final of 2017. The final will take place on Sunday morning next 7th of May. 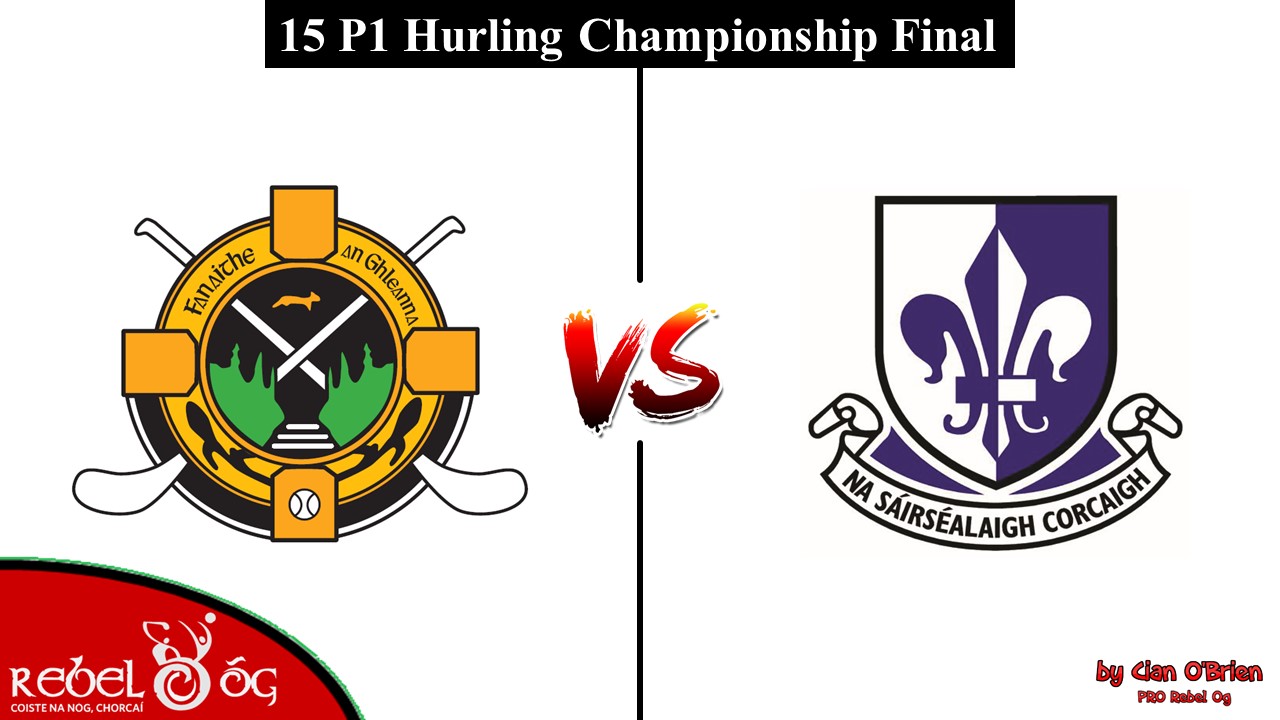 Sunday 7th of May at 1pm

The road to the finals saw both teams go down different paths.

The Role of honor of U15 Premier 1 Competitions

Rebel Og are now in our sixth season since our inception. The first Rebel Og U15 Premier winners were Fr. O’Neills in 2012, this was followed up in 2013 with Sats putting their name on the trophy, they followed up and won the competition for a second time in 2015 while  Na Piarsaigh claimed it in 2014. Glen Rovers won the trophy in 2016 and are current holders.